To outsiders, the British education system can seem very confusing. Why is it that some of the most expensive private schools are known as public schools, and if you go to college, the chances are you have either done very well, or very badly in your A levels, so where does university fit in to all that?

Many parents and teachers have asked us about the education system in the UK, and how the independent system meshes with the state system, so here is the first of a series of articles to try to explain what is what in the world of education in the UK at the moment.

Let us begin by outlining the state system because all independent schools are required to equal, or exceed, the standards set by the government, and both are monitored by OFSTED (via the Independent Schools Council (ISC), in the case of Independent Schools). It is also quite common in the UK for children to attend both private and state schools at different stages of their education.

Education in the UK is somewhat devolved, in other words, there are some local differences between England, Wales, Scotland and Northern Ireland, but basically, there are three stages of education, namely Primary Education (5-11); Secondary (11-18) and Tertiary (post-compulsory education).

In the UK, some form of education is compulsory from the age of 5 until the age of 18, and this can take place either in a state school, an independent or private school, or children can be homeschooled. Terms like infant, junior, primary, secondary, Key Stage 1 etc. can be very confusing, so below is a chart to help clarify what these terms mean.

State education is free, and books and stationery are usually provided, although some extra-curricular activities and educational visits may cost extra.

Nursery schools, or pre-school playgroups, are not compulsory but have always been popular with parents as a way of preparing children for compulsory education at the age of 5. Recently, some primary schools have nursery schools attached to them and because, rightly or wrongly, parents feel that priority will be given to children already at the school, many parents feel it is important to get their children signed up with the school as soon as possible.

Children start primary school at 5 and continue until 11. Usually, boys and girls are taught together in the same class.

At the age of 11, children move up from primary to secondary school to either a grammar school or a comprehensive school.

Tertiary Education is a term that covers education beyond secondary school and it includes higher education, which is used to describe undergraduate and post-graduate studies, and Further Education, by which we mean vocational education and training.

The grammar versus comprehensive debate

After the 1944 Butler Education act, the school system was divided into Grammar Schools, Secondary Modern schools, and Secondary Technical Schools and a selection exam was introduced, which children took at the age of 11 – the 11 plus. This system was heavily criticised by many in the post-war era – especially in the ‘60s, which was a period of great social unrest – as being elitist, and unjust because the 11 plus exam was often seen as an unreliable indicator of children’s academic potential. So, in 1965, the Labour Government tried to introduce compulsory Comprehensive education but a few English regions fiercely resisted and have retained their grammar schools. However, most children in the UK, and all in Wales, will attend a state comprehensive school.

To stream or not to stream

Grammar schools have traditionally taught children in different classes, or ‘streams’, according to their perceived ability, and some comprehensives adopted this strategy. Later, however, ‘subject streaming’ or ‘setting’ was more popular, which meant that pupils would be put in different groups, depending on their ability in a particular subject.

Since 1998, there have been six main types of state-funded schools in England, but as far as pupils and parents are concerned, they are non-selective, non-fee paying schools. All are accountable to the secretary of State for Education.

Many parents are confused by terms like Key Stage 1, and unsure about when pupils take which exams, so below is a table to explain the different stages in both the state and private sector. 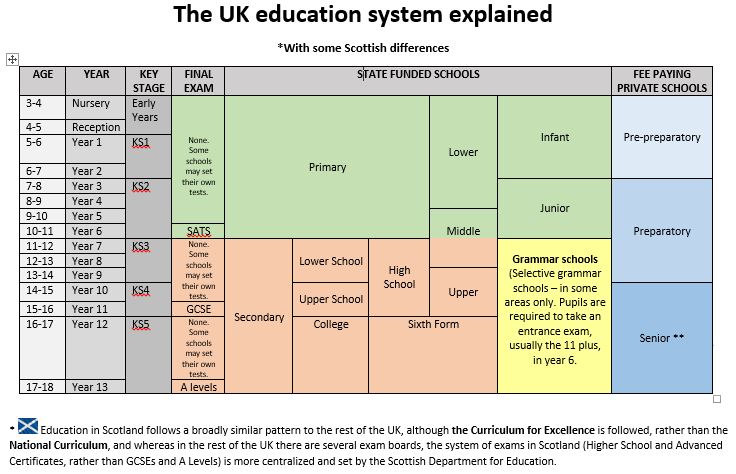 If you’re thinking of sending your child to boarding school, please do contact one of our experts for a free, no-obligation informal chat to find out more. You can find us at www.which-boarding-school.com or call us on  +441702588225.